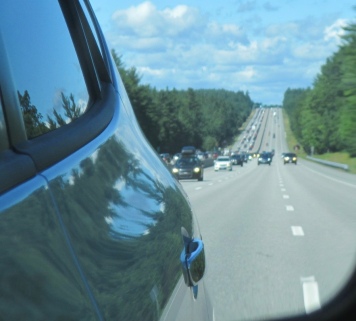 A few months back—probably in the fall when the weather was good and the roads were clear—there was a discussion among some of my Facebook friends about motorcycles and pushing the limits of speed. These people were jovially comparing their top speeds, as if hitting 120 was a great accomplishment.

Recently, my 16 year old has been talking about getting a motorcycle, and I am not thrilled at the prospect. While I hope he will ride responsibly if he ever does get one, there is always that temptation to just test how it might feel to go a bit faster than one should. Meanwhile, I have always lived with the paranoid and constant fear that when a motorcyclist speeds past me on the highway, I will encounter the rider up ahead, splayed out in the road after a momentary misstep.

The other day, we were on our way back from a college visit, because really, shouldn’t we just continue to look at colleges since I am now four years into the process: one kid, then the next, and now the youngest? We had just merged from one highway to the next, and I was finding my place among the several lanes. A motorcycle with a young rider suddenly flew past us at an alarming speed, weaving in and out of the cars as he flew. He was living out the rush of a lifetime. A state trooper pursued him, sirens blaring, but he continued his reckless journey unabated.

As we crested the top of the hill, we had an almost two-mile view into a slight valley and up another hill. The motorcycle was a small dot moving along the road up ahead—easy to spot as it traveled faster than the cars around it. The trooper had backed off, knowing that continued pursuit would increase the possibility of the danger.

We traveled another couple miles and… Chaos. We spotted the motorcycle in a crumpled heap. W let out a fearful, “Oh!” and I gasped, the tears springing almost immediately. This was just too much. This sight—the scene of bike, the rider, and the chaos that comes before  emergency personnel arrive—is one of those scenes that I will never unsee. It is one that will quietly creep alongside me and rear its ugly head each and every time a motorcycle recklessly passes me. My once paranoid fear is now realized, confirmed, and etched in my brain forever.

And while I would not wish this sight on anyone, this lesson is one that only the road can teach—either by example or by experience. This lesson is best learned by example. I believe the message came screaming through to my son without my need to speak a word. This young rider had gathered enough speed to send himself headlong into whatever it is that comes next.

Each and every day, we walk the thin line between this world and the next. Depending on our choices, some days, that line seems much thinner and more vague than others—both as fine as the silk of a caterpillar hanging from a tree, and clearly visible to the naked eye. Without warning, we can slip from one side to the other.

One of the toughest lessons to learn is that each and every day is one of those days.

2 thoughts on “Tough Lessons from the Road”