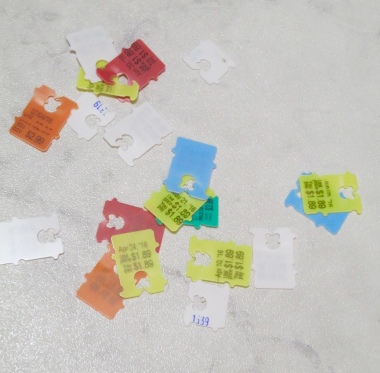 Over the weekend, I was vacuuming the kitchen when I got the idea to vacuum under the stove. This is not something I do on a regular basis for a couple of reasons. The first reason is that I don’t have the time, and if I can’t see the dust bunnies gathering under the stove, they might not bother me. The second reason is that if I remove the stove’s storage drawer, the cats will hear the commotion and come running. They know that in their overzealous play, they often carelessly chase their toys under the stove, abruptly ending any play session in progress. They also know that when we pull the drawer out, they will re-discover a veritable gold mine of lost toys.

Anticipating a sudden influx of cats, I pulled the drawer out and set it on the floor. A cat ventured into the space where the drawer had been and began sniffing around. I peered under the stove. “Huh,” I said aloud, surveying the array of formerly hidden items. “I wonder what made them put those under there.”

J heard me musing. “What’s under there?” she asked from her spot on the couch in the living room.

“Um… you’ll have to come look,” I responded. I wanted her to see what I was seeing. This was not the usual collection of cat toys and pompoms, and part of me was in disbelief.

She got up from the couch and came in. I was bent over looking under the stove, and she looked over my shoulder and smiled.

“Isn’t that funny?” I asked. Under the stove was a stash of those plastic tags that come on bread bags—the ones that are used to hold the bag closed. I could not imagine how the cats managed to not only get them, but to chase them all under the stove.

“Wanna hear something funnier?” she asked as she raised her iPod to take a picture of the colorful pile.

“C and I have been stashing those under there for months waiting for you to find them!”

But of course… you know what they say about payback. You never know when (or where) those tags might make a reappearance!

One thought on “Stash”