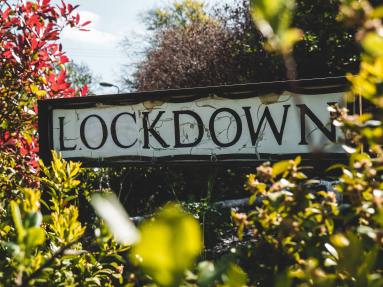 This period of lockdown has offered us a unique opportunity to shift our focus and reevaluate who we are and what is important. It has offered us a unique perspective on the things we hold dear. As many people sort, declutter, and simplify their homes, they might begin to sense that what’s important lies in the little things, the intangible things, the spiritual-rather-than-material things.

Logic: Today, I almost started an email, “I hope you and your family are doing well in lockdown.” Now, no matter how true and relevant that is, I couldn’t help but think it sounded like the family was in jail. So I rewrote my opening sentence. The person who received the email will never know of my near faux pas, but I definitely appreciate the thought that I have to put into writing a normal statement after working from home for nearly two months.

Life: Yesterday, I helped my son move out of his college dorm for the final time. This was not the way it was supposed to be—returning to a room that was a time-capsule, untouched since the mid-March day he came home for a week of spring break; moving out with almost no one else on campus; not having the much-anticipated celebrations of scholarship, graduation, and ending ceremonies. It was a two-hour time slot of “pack up your stuff and get out.” When I drove away, he stayed behind, saying good-bye to a senior-year-interrupted in the way that was appropriate for him. As I drove home, I shed a few tears for him—for the proper end of college he wouldn’t have; for the memories he wouldn’t make in favor of others that would define him and his entire cohort of age-peers. And as I drove, a bald eagle flew overhead as an illustration of the way he will soar once the tethers have been released. It will be a different world by then, but these young adults are in the perfect position to take it on and run with it.

Laughter: Our house is regularly filled with laughter, even in the tough times. These days, we could easily abandon laughter altogether in favor of the dark and dreary, but where would that lead us? Nowhere good, no doubt. So we laugh. On a recent afternoon, I was cutting the hair of my younger son, exercising the clippers that I bought when the boys were young to save money on haircuts. I hadn’t cut anyone’s hair in ten years, at least. But this kid likes his hair short, so he asked me cut it. At one point, in a move that was far from professional, I realized the cord was hanging in his face. “Sorry about the cord,” I told him to let him know my technique was far from polished.

“That’s okay,” he told me. “I’ll mention it in your Yelp review though.” Ha! If I open my own pop-up barber shop, that would not be the worst thing my Yelp reviews would say.

We do our best to hold on to the lessons we are learning. And we keep laughing because the laughter keeps us positive and the positive keeps us moving forward. And forward is the best way to get through this.

{Photo by Matt Seymour on Unsplash}