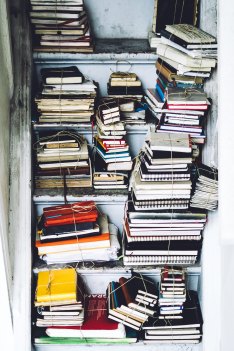 Lately, I’ve been on a de-cluttering spree. And by “spree,” I mean I declutter a small area when I have a few free minutes, which is not very often.

But through my de-cluttering, I have found some good resources for donating, recycling, or repurposing the things I no longer want. There are organizations like Habitat and Goodwill, local organizations like churches and Scouts which take donations for fundraising rummage sales, and there are shelters and resources for the homeless or people trying to get back on their feet.

Lately, I’ve been using Facebook Marketplace to pass along some of the items I am uncovering in my decluttering. Just this week, I sold an item that my daughter thought she might just give away. When my son came downstairs one morning, I told him that the item on the kitchen table—which was taking up half the table—would be gone by the afternoon because I had sold it on Facebook.

“I’m not sure I like all these people you’re meeting on the Internet, Mom,” he stated disapprovingly. I laughed, not only because his words were funny, but because I had spent his lifetime cautioning all three of my children about meeting people on the Internet.

“No really,” he continued as he opened the front door to check the temperature. “I hope you don’t do that when we’re not around.” He went to the pantry and pulled out a box of cereal. He poured himself a bowl and started in on his breakfast without another word.

Kids, they are funny, aren’t they? But even several days later, I just can’t quite tell if he was trying to be funny. Or if he was completely serious, in which case, I am one lucky Mama.

{Photo by Simson Petrol on Unsplash}