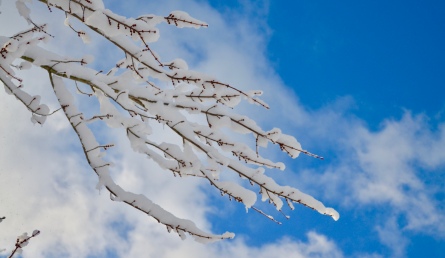 Tuesday was a snow day for us. When I woke up in the morning, the radio mentioned school cancellations, but I was half asleep and didn’t believe it. Through my five a.m. fog, I reached for my iPad, pulled up the local television station website, and scrolled through the cancellations. Sure enough, our town had cancelled school. The town in which I work had also cancelled school, though there was nothing yet from the university.

I stumbled to the kids’ rooms in the dark to turn off their alarms, trying my best not to disturb them more than necessary. I went back to bed, armed with my phone to take the “alert” calls that would inevitably come. Nowadays, it is so easy to tap into the school cancellation list, and with multiple schools and school districts involved, that can be a good thing.

But later that morning, when I finally looked outside, we had about two inches of snow. Two inches. And a snow day? Clearly, this must have been an oversight on someone’s part. A day off means, the kids will have an extra day tacked on to the end of the school year. Sigh.

In a text to my sister, I told her I suspected the world had grown wimpier since we were kids. I remember schlepping through snow up to my thighs (though I will admit, I was a bit shorter then) to get to school. Occasionally, my boot would become lodged in a snow crater when I tried to step, and I would have to reach my arm all the way into my leg-long footprint to retrieve it. Once, a storm closed school for two consecutive days, but that was a memorable spring storm one April when winter was supposed to be over. That storm dumped three feet of snow, and I can still tap into the feeling of wonder and excitement I had walking through the labyrinth of shoveled pathways.

On days when the world seems wimpier than in years past, I tend to become one of those parents, just like my parents before me, and their parents before them. You know the ones I mean…. Back in my day when life was simpler, we trudged through three feet of snow every day to get to school. Maybe it was a two-mile walk to get there. And it was definitely uphill both ways. And maybe it was 10° below zero every day during the winter because back then, it was commonly believed we were entering the next Ice Age.

Or maybe—just maybe—I tell hyperbolic stories because here in northern New England, a snow day for two inches of snow feels ridiculous, and it’s not something responsible adults feel the need to encourage.

And even though my children roll their eyes at my stories, there is no doubt that 20 or 30 years from now, they will be telling their own hyperbolic childhood stories to their own children, their nieces and nephews, their students. Because this…. this is the way we express to the next generation that we think they are getting too soft around the edges and too wimpy in the middle. And this is the way we let them know that maybe, just maybe, things aren’t quite as bad as they like to believe.