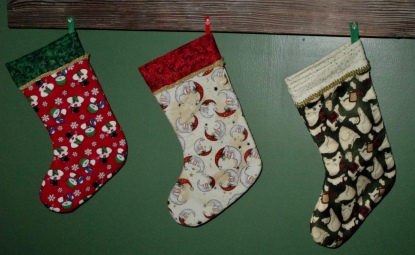 Stuffing stockings—one of my annual Christmas challenges. Have I found enough stuff to fill each stocking? Will I have too much stuff, and if so, what will I do with the extra? Even after years of filling the same stockings, I always second-guess myself.

This year, we approached the holiday in “scaled down” mode. Finances are a little tight, so when I was searching for stocking stuffers, I decided to go the practical route. In addition to some toiletries, toothbrushes, and a tiny puzzle-y-thing or two (okay, and the requisite chocolate…), I purchased socks and underwear to fill the extra space in the stockings because, well… practical (and necessary).

When I started to actually fill the stockings, I found that I did not have enough room for the underwear. I had purchased a package of underwear for each of the teens in my house. While the packages were a good idea and would have taken up a sizeable chunk of space, the stockings were full enough without them. So late on Christmas Eve, I made the decision to place the packages of underwear in the children’s rooms, as if Santa, himself, had gone to their rooms to check on them and placed the item there.

On Christmas morning, I wanted to make sure none of them missed this amazing Christmas treasure. W was the first one up. “Did you see that there is underwear in your room?” I asked him.

“Yes,” he told me, and then his face brightened. “I was so excited that I had to wake C to let him know. ‘Santa came! Santa came! And look what he brought us: new underwear!’” he recounted the scene for me, and I had to smile at his sense of humor and fun. In fact, he actually did wake his older brother with his humorous rendition of childlike Christmas excitement.

And because that childlike excitement of their younger days has tempered to a much calmer holiday emotion, I always smile at the moments like this one—humorous or not.

The big brother who is trying to sleep in … maybe he doesn’t find these antics quite so entertaining.

One thought on “One final thought–Christmas antics”