As poet Robert Frost writes, “Good fences make good neighbors.” In New England, there is much evidence of good fences in the miles of rock walls that amble over hills and through meadows in their forgotten quest to separate the farms of yesteryear. As I look at these walls, I can see the neighbors, each on his or her side of the wall, walking the line together piling stone on stone after each hard winter.

I, however, would like to argue that good neighbors exist regardless of the state of the fences that separate them.

As the resident of a townhouse, walls are generally all that separate me from my neighbors. Thankfully, my neighbors and I get along. At least I like to think we do….

Take my neighbor with whom I have an adjoining deck. For a long while, we had a lack-of-privacy fence between us. Granted, it was supposed to be a privacy fence, but it failed miserably at that job. In fact, the fence actually rotted and began to fall apart. For two-plus years, there was a large hole—at adult eye level—which allowed us to chat without looking around the fence by leaning on the railing. If I stepped out my door, I would often hear, “Howdy, Neighbor!” and a lengthy conversation would ensue through the hole in the fence.

The new privacy fence, rebuilt earlier this season, has just enough space between the slats to allow for partial view from one deck to the other. There certainly is no true “privacy.” As we often say, it’s good we like each other!

On the other side of our house, our former neighbors had two little girls. While our decks were not joined, we did have a more effective privacy fence separating us. But that didn’t stop the girls. If they heard us on our deck eating dinner, they would lean over the railing and engage us in entertaining conversation. It usually started something like this:

“Are you eating dinner?” one would ask. And when we replied with the affirmative, the conversation would continue. “What are you eating? Are you almost done? I have sand in my shoes from the sandbox. Wanna see it?” On a crazier night, one might announce from just behind the fence, “I’m naked. Is that embarrassing you?” 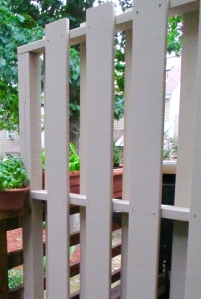 [Image is a photo of our privacy fence, stealthily snapped out my back door so my neighbors wouldn’t think I was creepily stalking them. Clearly, “privacy” is not the strong point of this fence.]