By a stroke of pure, dumb luck, college drop off for my son dovetailed beautifully with a weekend camp program we typically attend as a family. While it was unlucky that my college son would not be able to join us at camp, it was lucky that I wouldn’t be spending the weekend at home, where his absence would be most pronounced. A weekend at home would mean I would notice that that house was one quarter less full… that there was an empty bed… that the food wasn’t disappearing from the house as if being consumed by a powerful vacuum. Instead, I would be away, occupied by (most of) my family and some long time friends.

Even away from home, I found myself frequently wondering what my son was doing, who he was with, and how he was navigating his new life in the college environment. Camp was merely a partial distraction, but my son was still in the forefront of my mind.

On the second morning, as we slogged out of the dining hall after breakfast, the sun caught the shape of an incredibly industrious spider crafting a web in the corner of a small alcove near the doorway. The creature was quite large and conspicuous. Had it fallen on someone, there is no doubt a scream fest would ensue.

A small group of us stood transfixed, watching the spider spin its web, carefully attaching silk strands one to another as it wove its deadly trap. It was working on the center of the web, maybe a repair from a recent struggle—there was no question this spider had been eating well in order to achieve its current size.

As I watched the spider, a thought began to creep into my head, eclipsing—no! joining with the thoughts of my son. This spider would make the perfect dorm pet! After all, there were rules against four-legged pets, but the students could have fish. Why not a spider?

A spider would live peacefully in his room, right over his bed, taking care of all the tiny bugs that enter the room. A spider would not take up much room; it would live quietly, weaving webs in the corner over his bed, repairing its web and possibly making it bigger each night. Eventually, the web might interfere with the bed, but by then, my son would be used sharing his space with his unusual pet….

Yes, these thoughts did enter my mind as I watched the spider weave its tangled web, pulling me in to its weaving. For a brief moment, I thought about how very much my son loves spiders (or… not). And how he might be perceived by his dorm mates if he kept a pet such as this in his room.

And then I turned and walked away. Because even though bringing this spider to my son is humorous in theory (or maybe just in my head), the same humor would not be present if I actually appeared at my son’s dorm door, spider in tow. In fact, I might be banned from the campus. Forever.

And as far as the spider goes, it is much better off right where it is. 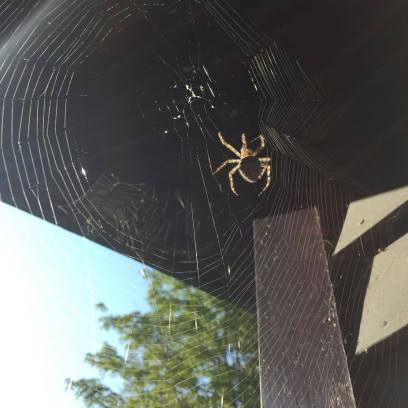 [image is a photo of the camp spider, used with the photographer’s permission]

One thought on “Crazy Thoughts”