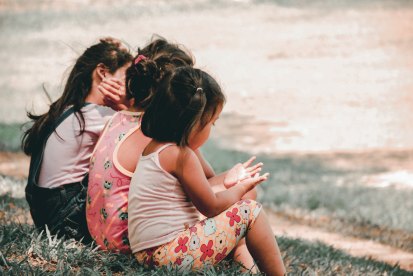 When I was a kid, summers were long and slow, and by mid-August, boredom had fully settled in. The long summer days had been filled with play and bike rides and make believe. We had spent time with friends and siblings and cousins—perhaps to the point of annoying each other. We had filled long nights with neighborhood hide-and-seek games that stretched well past dark. We had caught fireflies then set them free. We had grown Monarch butterflies from tiny caterpillars. We went to camp, and we read piles of books. We had spent long, lazy days in the pool until our lips turned blue. Picnics and bike rides, baseball games and kite-flying, watermelon and popsicles—we had done it all. We were bored. And we were ready to go back to school.

But in Massachusetts, where we started school after Labor Day, we still had many long days stretching out in front of us. And we had to fill them.

Being bored was never really a bad thing. Boredom instilled me with creativity. I thought up fun things to keep myself busy. I worked to create useful things from the items we had around our home. I learned to make craft items that people would use, giving me an eye for how shapes, colors, and textures worked together.

I became a deep thinker. In my boredom, I had grand daydreams in which I traveled the world and beyond, taking imaginative detours and side roads. I tried on different identities, playing pretend and dress-up, shedding my quiet personality and donning the cloak of someone more adventurous. I thought about the way the elements of my life fit together.

Boredom pushed me outside where I learned about nature. I watched caterpillars hatch from miniscule eggs and butterflies emerge from chrysalises. We rescued baby bunnies from the neighborhood cats, and nursed an oriole with a broken wing. I explored trails and woods and followed streams. Occasionally, I came to the end of the road and had to figure out where to go next.

Boredom gave me focus. It gave me time to reflect on who I was, what I wanted to do, and how I planned to get there. It forced me to think about which career options would be the best for me, my future plans, and how to deal with my thoughts about myself.

Boredom forced me to realize that life is not all that bad.

And now, as I watch kids focus on their phones, compulsively check messages, and interact with the people sitting next to them via text, I can’t help but think we’ve gotten pretty far off track. Maybe what we need is a little more boredom.

{Photo by Charlein Gracia on Unsplash}