I am pretty sure my father would have secretly loved to have a son. I say secretly because when you have two daughters, you can’t really express a fact like that. “Oh darn. I really wanted a son!” But if he’d had a son, he would have been very happy.

However, my dad always made sure that my sister and I knew how to make simple repairs and improvements around the house. When he embarked on a project, he would often recruit us to “help,” which allowed him to impart wisdom and instructions as well as dos and don’ts of home repair.

When my children left for a recent trip to Florida, I knew this solitary time was my opportunity to re-caulk the tub in their bathroom. There is no denying the fact that I know how to have a good time when my kids are away. Really, the only time the tub is not in use for several hours a day is when they are away, and anyone who has ever caulked [successfully], knows the tub and its various components need to be good and dry before the new caulk is placed.

When I settled in to remove the old caulk, I decided I would do a better job if I could just remove the tub spout to better clean off all of the tiny remnants (or large gobs) of caulk that had made their way under the fixture. But how to remove the fixture? It seemed to twist, but just in case, I consulted YouTube. There, I found a tutorial on how to remove (and replace) an old tub spout. Replace had not occurred to me, but a new tub spout would be just the thing to make the tub shimmer!

I took a trip to the local home improvement store where I found the parts I needed. At the checkout, the cashier looked from my purchase to the old spout that I had brought along just in case I needed a visual example. “That’s a good idea,” she said, pointing to the old spout. “To bring that along.” She paused for a moment, and then she said, “Are you doing this all on your own?” I nodded.

“I wish I was brave enough to take on that kind of project,” she commented. “That’s impressive.”

Not really. I must say, I was trained by a good man to recognize that many projects are not as overwhelming as they might appear. In truth, it’s not a big undertaking to change a tub faucet. The big undertakings I leave to professionals.

Back at home, I finished my project. It was straightforward without any frustrations, and I must say, it looks pretty good. Typically, when I finish a project like this, I would call Dad. “I just changed my tub spout,” I would tell him, and his first response was always the same.

“Did you?” he would respond with a hint of pride in his voice and then we would talk about what I had fixed and how the project had gone.

This time, I can’t call Dad to share my success. But I’m pretty sure he’s smiling with that same hint of pride up in Heaven. Because love… it doesn’t end. It only changes form

I was out for a walk with my son the other evening. Truth be told, it wasn’t just a leisurely walk; we were taking out the garbage, and in our neighborhood, “taking out the garbage” means walking it a quarter mile to the dumpster in our condo complex. In the summer, I prefer to walk the short distance rather than drive.

It was a beautiful night with a slight breeze, and even though it was just after 8:00, it was already quite dark. A couple walking their dog appeared out of the darkness like a grainy photograph in a pan of developer.

The dog was friendly and came over for a sniff and a greeting. I pet her quickly on my way by. “She always has to get her greeting,” her owner said from well within the shroud of the evening darkness.

“I have a cat like that,” I told them. “Perhaps you’ve met him. Black and white… very friendly? He’ll come right up to you and say hi,” I informed them.

“Oh, you have met him! He has a bit of a reputation in the neighborhood. He’s cute and friendly, a bit of a pest, but he keeps the chipmunks at bay,” I informed them. “His name is Poto.”

“We call him Skinny Pete,” they returned. “We have a cat at home that looks just like him, but he’s fatter.” Interesting, I thought, that they would refer to my cat as skinny. “But now we know his name, at least.”

We exchanged a few more pleasantries before we ambled down the walkway to complete our dumpster run.

“The cat knows more of the neighbors than we do,” my son said, matter-of-factly.

“It’s kind of sad,” I replied. “When the cat has a more active and exciting social life than we do.” 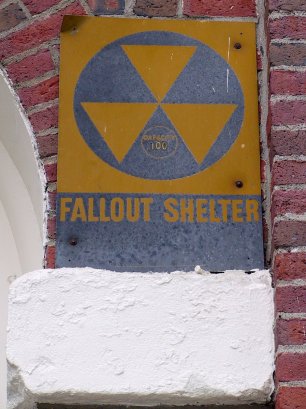 So… I’m on Facebook today, and a random ad for Home Depot pops up. Well, I’m not really going to say it was “random” because I was on the Home Depot website earlier today looking for a new umbrella for my deck. The wind apparently took mine the other day when I wasn’t home. [This time, I think I’ll get a base and some clamps….]

But this pop-up ad was a bit surprising. It was for a “Life Pod Shelter,” purportedly for protection from tornadoes. The one for which I had an ad was a “14-Person Underground Storm Shelter,” for the bargain price of $7865. A similar storm shelter that will hold four people is only $3809.

Now here’s the thing. I live in New England, which is not known tornado country, though tornadoes have been known to strike upon occasion and under the right circumstances (perhaps that’s what happened to my umbrella…). I have not been searching for any kind of storm shelter, fallout shelter, or even a garden shed. In fact, I live in a townhouse, so I couldn’t bury one in my backyard if I wanted to (which I don’t). So I’m wondering if anyone else has similar ads popping up on their social media sites. Since the political climate is glaringly volatile right now, perhaps Home Depot thought they would be proactive in promoting this product.

Not surprisingly, this product “isn’t currently sold in stores.” I imagine storing these pods in your average big box store could be quite a challenge. However, you can order one with standard shipping (curbside delivery at the bargain rate of $55…) and it will arrive at your house between September 5 and 11. I’m afraid that might be too late. It seems the danger may be more imminent than that, but if you start excavating your yard before it arrives….

If you are curious and want to check it out, go to Home Depot. It’s listed under “Storage & Organization.” No kidding.

Recently, I have taken on the job of sorting through stuff. The stuff in question consists of items that were hidden in long forgotten boxes stashed in the attic of my childhood home—old family photographs, school papers, letters, greeting cards, books, newspaper clippings… you name it. Every now and then, in amongst the useless stuff, I encounter a rare—albeit worthless—gem, and sometimes, I feel the need to share it before I throw it out.

Being a woman of a certain (non-youthful) age, I was immediately intrigued when I came across a 1941 booklet entitled “The new way to a Youthful Figure.” I am most likely the exact target demographic of this publication, though two generations out. In fact, I have finally hit the point where I can put on a pound or two just looking at ice cream, which does not thrill me. So I opened the booklet to see what the 1941 trending logic was to maintain—or regain—a youthful figure.

What I discovered is that the dieting information of yesteryear is pretty much the same information as today. There is information on alkaline versus acid: “If you would feel at your best, be quick on the trigger, physically and mentally, you should let the alkaline-forming foods be slightly in excess of the acid-forming ones.”

There is a 3-day cleanse to begin. And we are assured, “By Monday morning your system will be thoroughly cleansed. You will be so hungry that the reducing menu will taste delicious.” Ah, now that’s the ticket to a successful diet—starve yourself first so you are happy to have anything edible! Your stomach will be happy, but your brain might be foggy.

In the back of the booklet, there are menus to help limit calories each day, and there is a lengthy list of 100-calorie portions. Pretty typical. “The reducing menus, pages 15-19, provide all the nourishment your body requires. Moreover, if carefully prepared, appetizingly served, they are not only satisfying but delicious. If you follow them carefully, with absolute honesty even for a few weeks, you may look in your mirror some morning and cry, ‘Eureka! I have a waistline! And behold this faint blush of rose in my cheeks! It’s amazing how fit and lively I feel!’” I don’t know about you, but the day I talk to myself in the mirror this way is the day I might need to be moved to a safe location.

Should you feel the need to read this booklet, I would be happy to scan it and send it to you. Heck, I’ll just send it to you, so you can have the original! And I will go back to sorting my stuff. I’ll be sure to share any more gems I find.