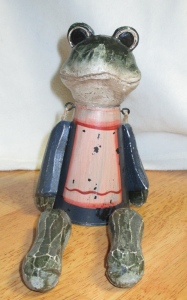 When I was younger, I had a collection of knickknack frogs. One of these—made of tin and wood with limbs that dangle from joints of twine and wire—was a gift that I received many years ago, and it has a simplicity to it that is reminiscent of an earlier era. As I have moved residences over the years, I’ve pared down my collection to my favorites. This particular frog remained as it reminded me of my past for reasons I can’t exactly pinpoint.

In the townhouse where I landed with my children after my divorce, the frog took up residence on a shelf that held some books and a few ornamental items. Seldom did I notice it sitting there in its decorative, take-up-space kind of way.

One day when my children were still fairly young, I found this very frog sitting in the middle of my propane heat stove, right next to a candle that I had placed there at the end of the most recent heating season. It was late spring, and warm enough out that the windows had been open with regularity. The sight of the frog startled me because I wasn’t expecting it to be there. How odd, I thought. I wonder who put that there? It seemed like a bold placement for such an object, and I picked it up and moved it back to its normal location on the shelf.

The next morning, I woke the children, and I took a quick trip to the basement laundry room to gather some clothes. As I passed through the living room, I stopped abruptly, startled when I spotted the frog, once again sitting proudly—albeit unexpectedly—on the heat stove. The children were upstairs waking and preparing for school. I glanced around the room, not really sure what I was looking for. The room was empty. I set the laundry basket on the floor, and returned the frog to his spot on the bookshelf.

I took a deep breath, shaking off my surprise, and I went about my morning preparations.

When I was ready for the day, I went downstairs to the kitchen. I opened the door to welcome the spring air, and went to the back of the house to open the back door. Mid-way through the living room, I froze. There, on the stove, was the frog, sitting right in the middle where he’d been twice, now three times. My heart pounded in my chest as I thought through the possibilities. I glanced around the room expecting the unexpected, only daring to move my head. I pondered going to the basement to look around, but I couldn’t do it. Not alone. I went to the kitchen phone and called my neighbor.

“I think there’s someone in my house,” I reported in a near whisper. “Can you come over?”

“I’ll be right there.” She arrived a minute later, wielding a kitchen knife.

“What are you going to do with that?” I asked her.

She looked down and shrugged, smiling weakly. “It’s better than nothing!” Together, we searched the house while I explained the unexplainable to her. We found nothing, but we got a good laugh. We concluded that one of the children was playing a trick on me. No one would fess up.

It wasn’t until several months later that my oldest finally admitted to moving the frog. He read in a book how to secretly move an object. Or something. I have to say, he got me good, and we will forever joke about it.

Since that experience, the mere sight of this little frog holds an unexpected emotional charge. When I happen to see it sitting (usually in its normal place) on the shelf, I have a momentary jump in heart-rate, as if its very glance in my direction has power beyond its inanimate self. Then I laugh at the memory.